1 year! Wooo hooooooo!!!!! We made it! I already posted my sappy thoughts regarding Drew turning one, so I won’t rehash that again (although it is very hard not to feel a little sad that he is no longer a baby). Without a doubt, the theme of this past month was Drew being busy busy busy and just constantly on the go. 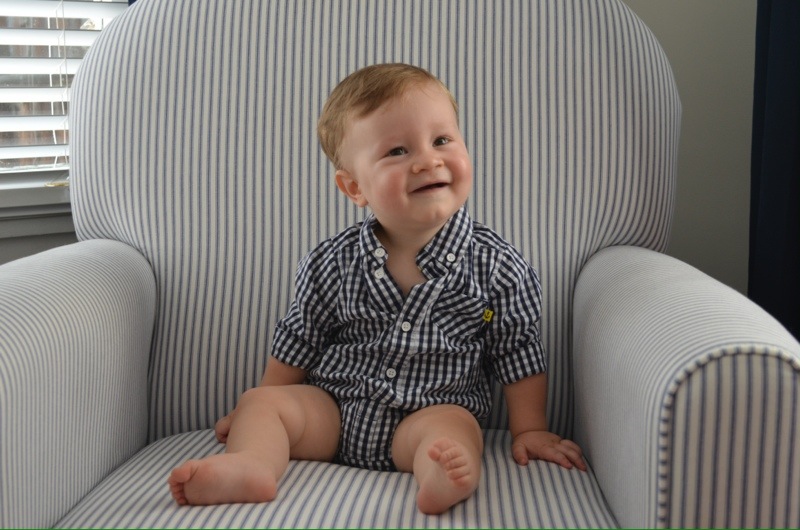 Look who crept up into the 55 percentile for height! Atta boy Drew! 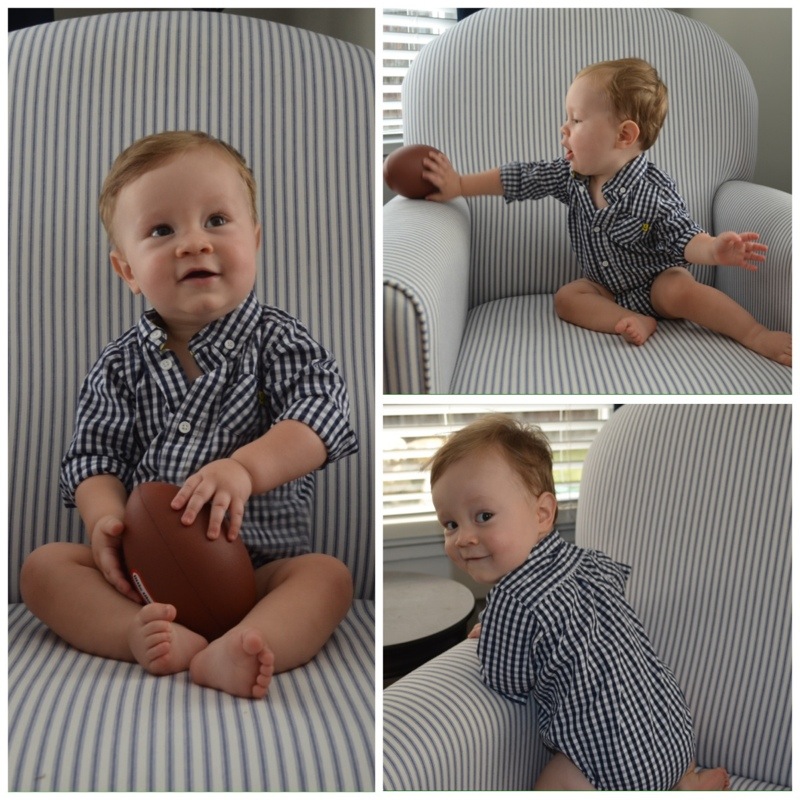 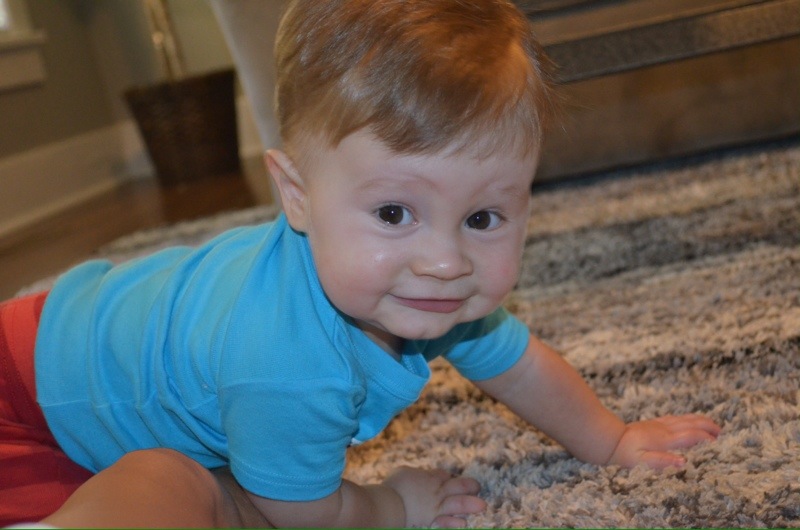 Personality: Last month I commented that Drew is typically mild mannered, but that he does have a temper. This is definitely still the case, however I think I have finally figured him out. When he’s overly tired or hungry – stay out of his way…or just get him food or a crib fast. Overall Drew is a very happy little guy. He absolutely loves using his voice and many times I’m sure our next door neighbors can hear his happy screams/screeches. 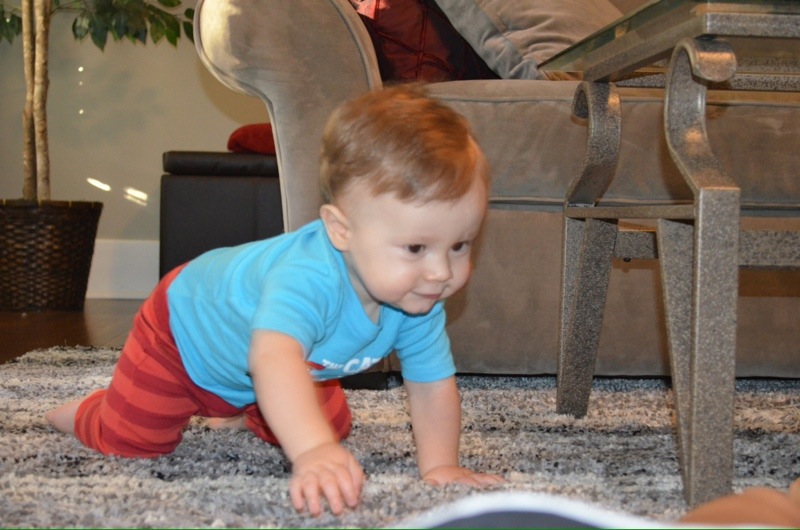 Eating: Gosh, I hate to say this but in just the last few days, Drew’s eating habits seem to be changing a bit. All of the sudden he is refusing to eat his oatmeal (the same oatmeal he has eaten every morning for the last 7 months) in the mornings. Then tonight, he threw a fit over food that I know he loves. We have so many friends who have said their kids became pickier at this age. We are really hoping to avoid the picky stage. So far he is still doing great with all of his daycare lunches though. And speaking of daycare….

Daycare update: I am loving the Gardner School and Drew is as well. It was a great move. Oh and as I mentioned above, Drew does awesome (most days) napping here. Anyone who has kept up with these updates knows that this was a huge issue in the last daycare and most days he’d come home exhausted since he wouldn’t sleep (ahem, or they wouldn’t put him in the crib for longer than 5 minutes to let him go to sleep). He is transitioning in a few weeks to the toddler room which means meals at a table, sippy cup only and napping on his cot from 12-2p. Wish him luck. 😉 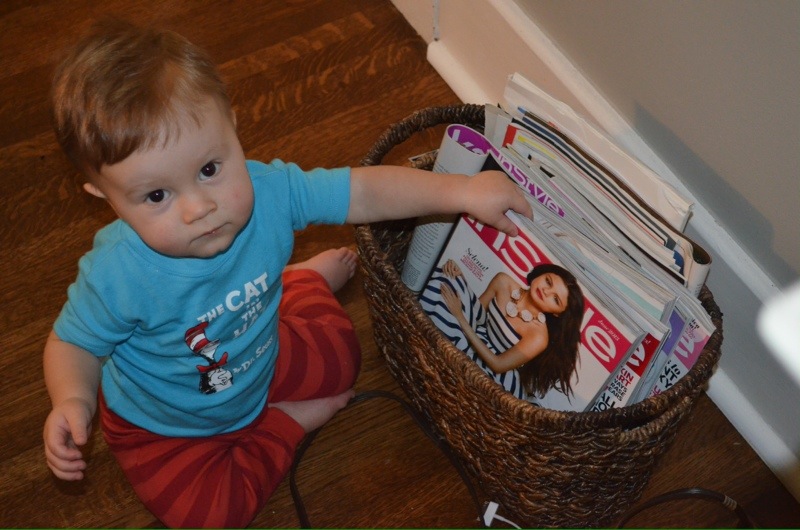 No, I don’t usually let him run around in a diaper. This was after his final “chair” picture. He wasn’t thrilled with having to take the pictures so I made a deal with him that he could run free afterwards. 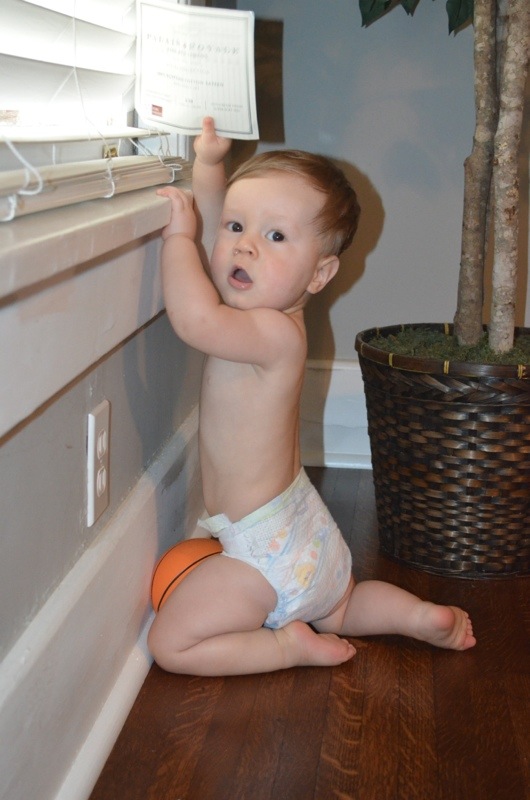 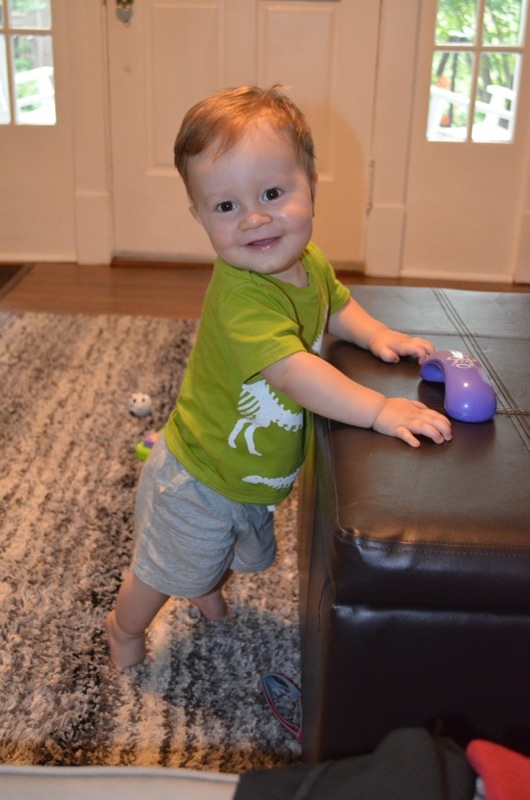 We had an awesome weekend celebrating Drew’s first birthday which happened to fall on Friday the 13th (maybe they’ll all be lucky for him!). This gift arrived on his birthday all the way from San Francisco. He was excited to open it. 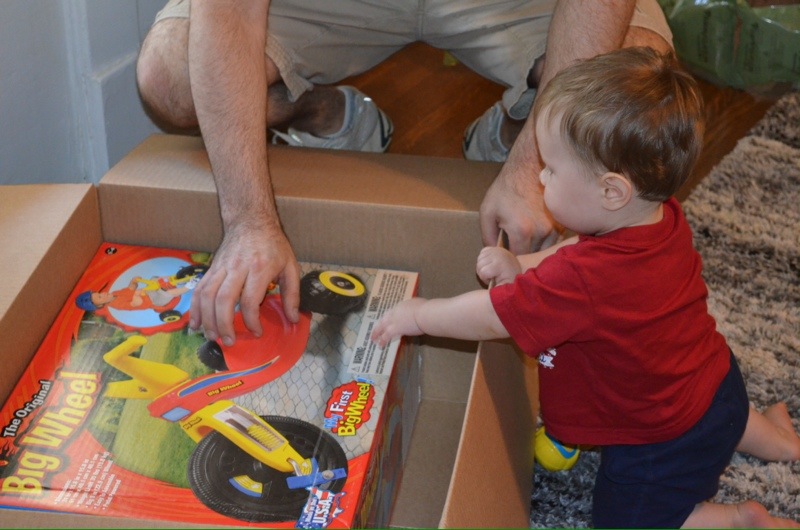 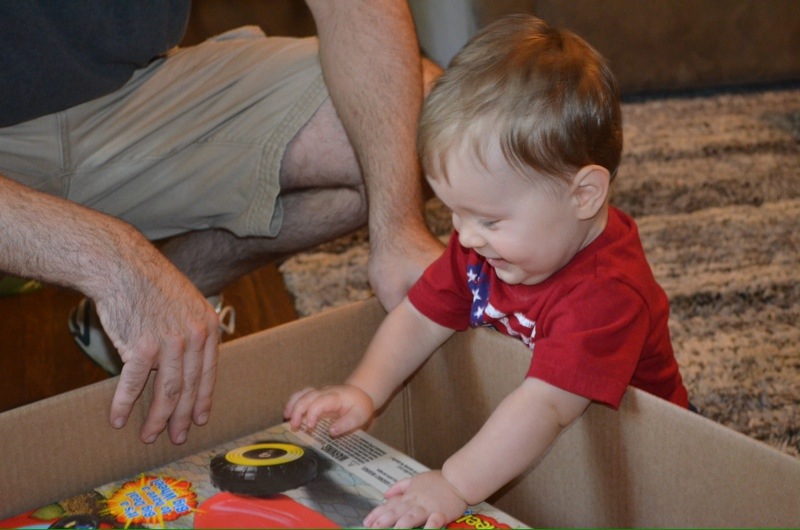 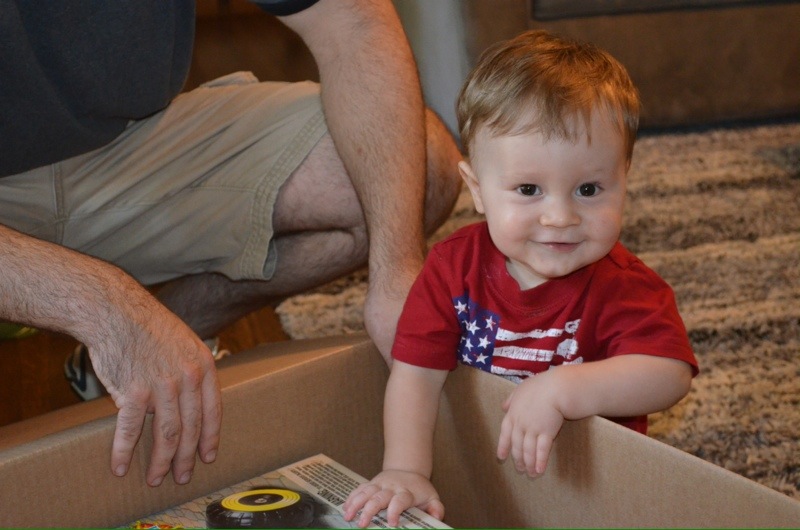 Even though his party was on Saturday, we all agreed he needed to have a little cake on his actual birthday. He just wasn’t feeling it. 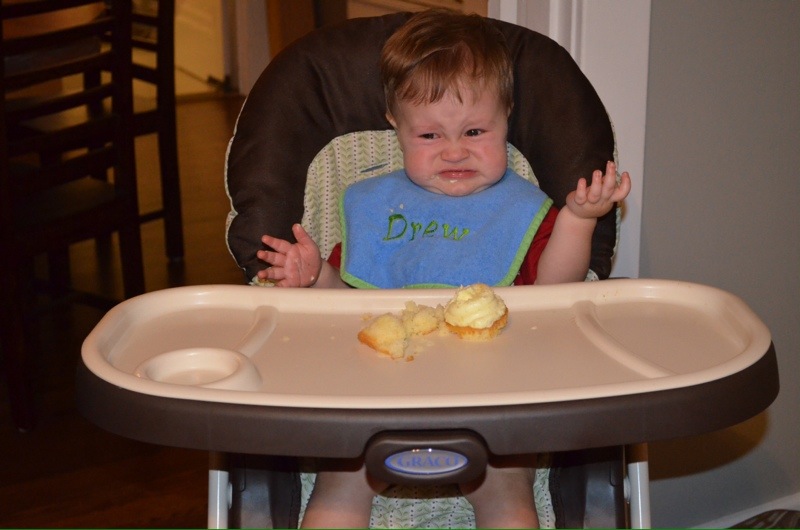 After a quick bath, he perked up with a couple of birthday presents. 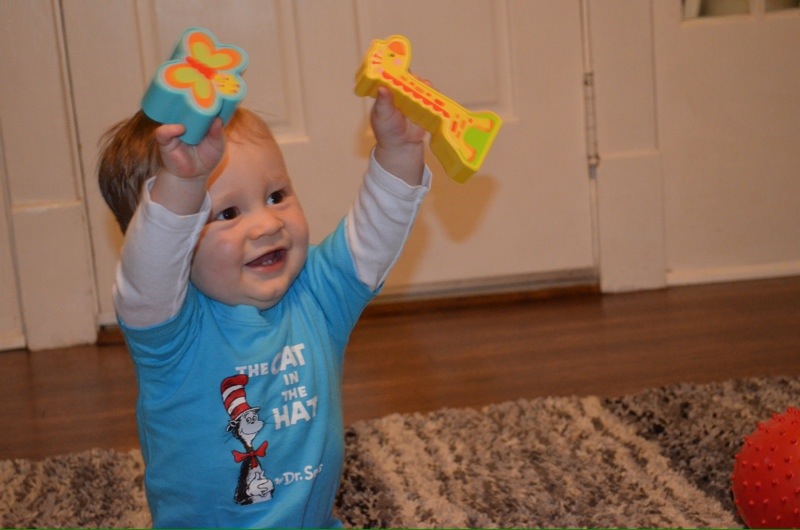 I did a miserable job taking pictures of his party but I’ll post what I do have soon in a seperate post. Lesson learned that I should have given someone my camera and assigned picture taking duties. Oops. 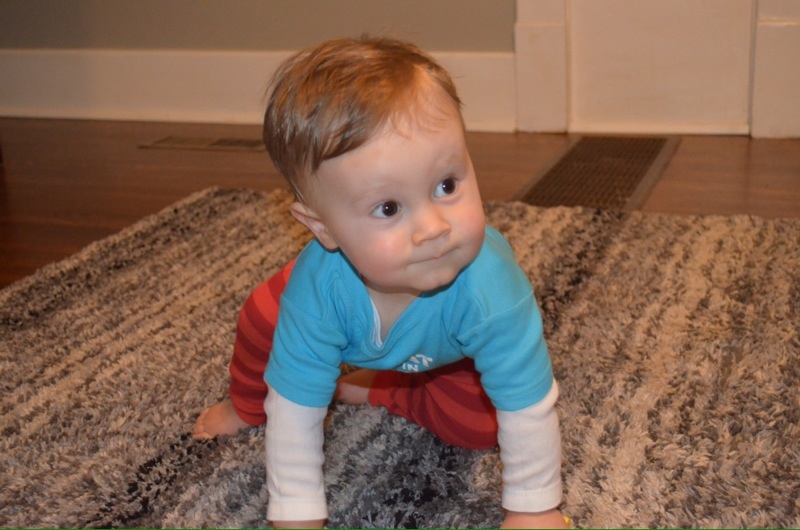 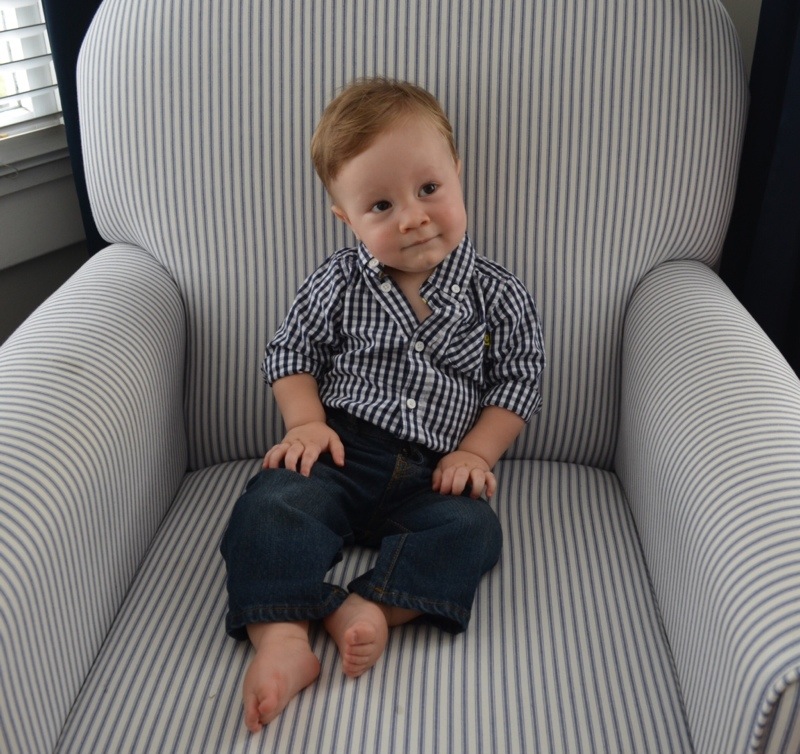 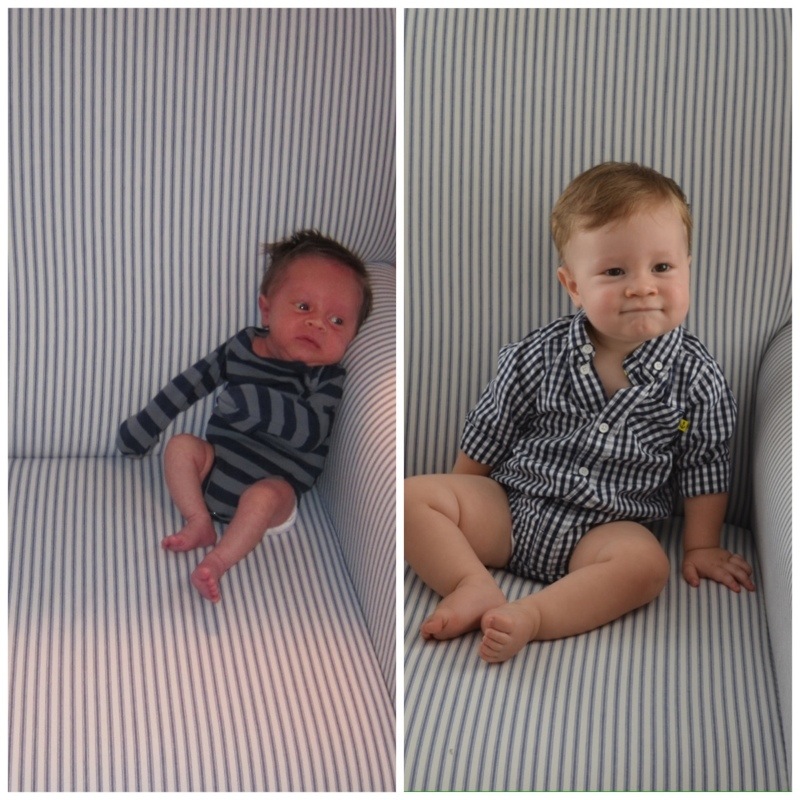