Weight: 17 ish or just shy of 17lbs. Why do I know that? Oh because we went to the doctor on April 11th and they weighed him (fully clothed). More on that below.

Health: Sigh……..well the good news here is that he had about two weeks of feeling great! Those were the two weeks he was home from daycare (one week with Grammy and Mom Mom and the next week when I was off of work). He returned to daycare on Tuesday of last week and came home with a fever and a new nasty cold. It’s been 7 nights of very rough sleep but knock on wood I think we are on the upswing now.

Sleep: Well the cold definitely got in the way here. There were nights in the last week that he’d wake up crying 6+ times. It was ridiculous. But – without the darn cold, he is still an excellent sleeper.

Personality: Oh yes. Drew is without a doubt beginning to show his personality. Just lately our super-chill-always-happy baby has had a few mini temper tantrums. Maybe tantrum is the wrong word. It only lasts a few seconds and it totally crack us up. If he is not where he wants to be or doing what he wants to be doing, he is sure to let us know. He tenses every muscle in his body and screams with his mouth shut. It’s hysterical. He goes from happy to furious and back to happy in seconds. Edited: Now that the cold seems

to be moving on, he is back to super-chill-almost-always-happy.

Teeth: none yet! Even though all of his grandmothers think he is teething, we really don’t think so . 🙂 Lately the only thing he puts in his mouth besides food is his pacifier at bed time and his toes.

Loving…his jumperoo (still), his baseball blanky (pretty sure this came from Aunt Terrie), being tossed in the air, sleeping in the car (both trips to and from Ohio he was out cold almost the entire time), sucking on his toes and his Daddy (obsessed!!!).

Clothes: He is still wearing 6 months clothes but 6-9 months is a perfect fit. Size 2 diapers. Not sure why I feel the need to document his diaper size, but whatever.

Crying: Very rarely (except the week he was sick – that week, plenty).

Firsts: Easter (lots of pictures here) and his first haircut!

Milestones: He’s a pro rolling (finally) from belly to back but he still really doesn’t see the point in going from back to belly. He’s pretty close to sitting up but not quite doing so on his own. 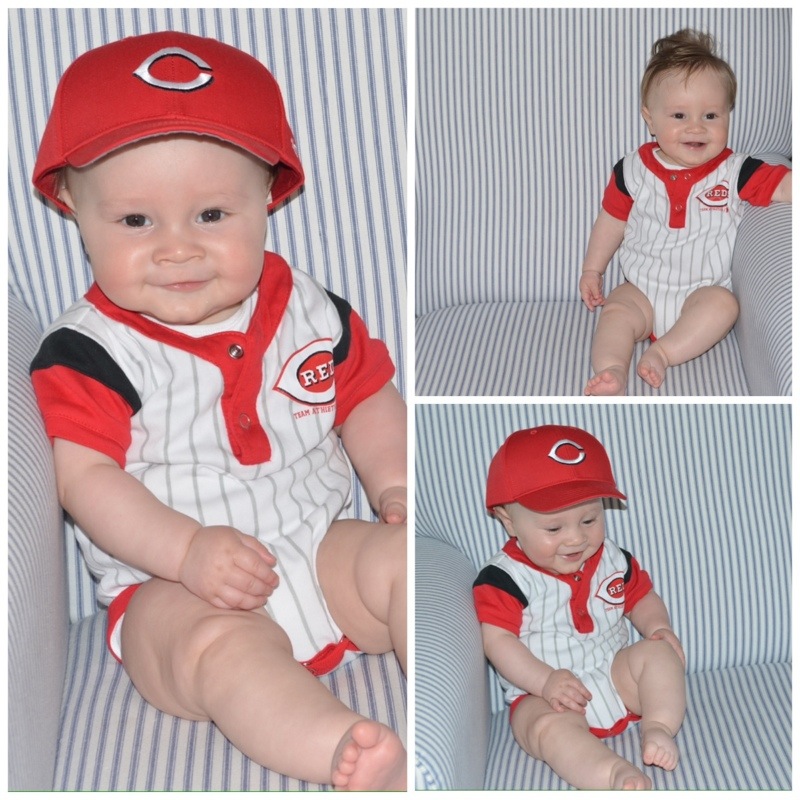 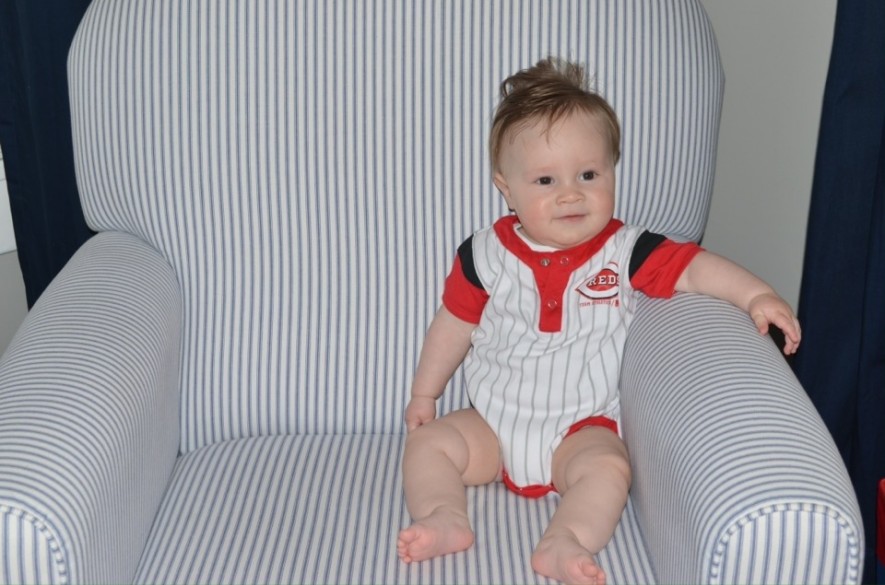 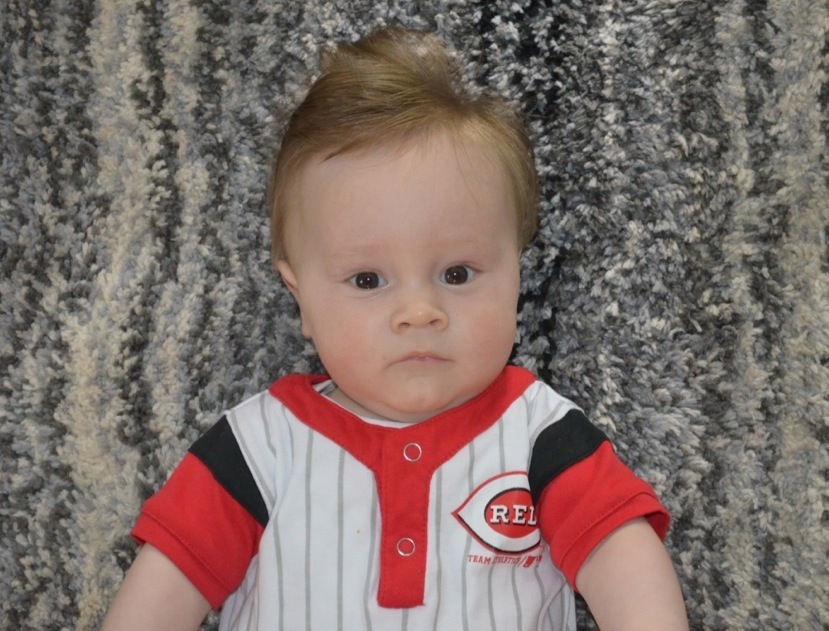 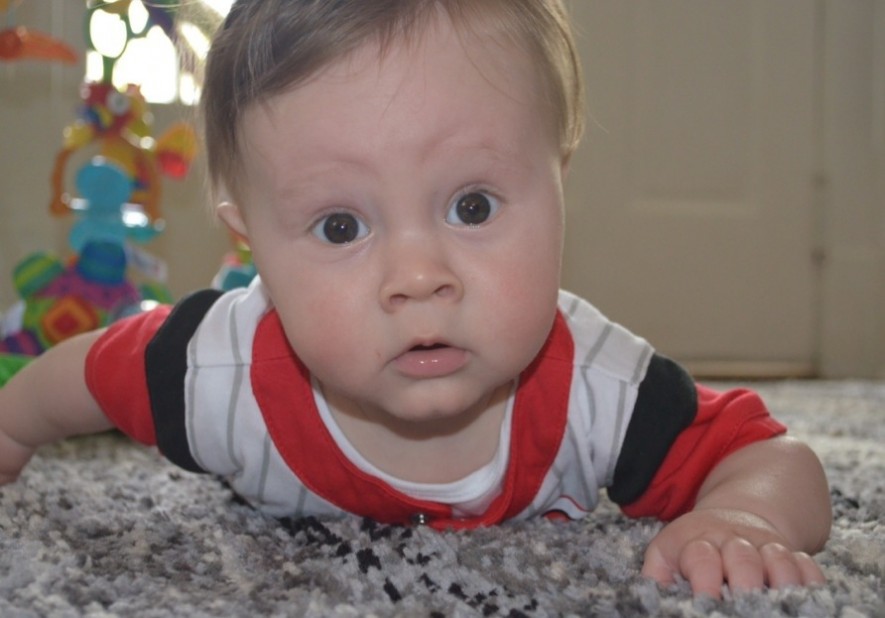 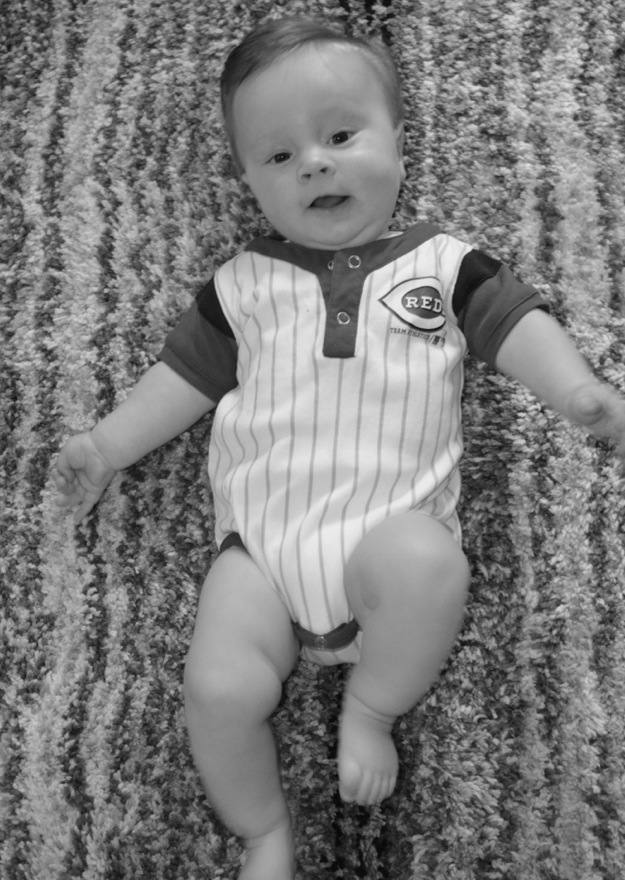 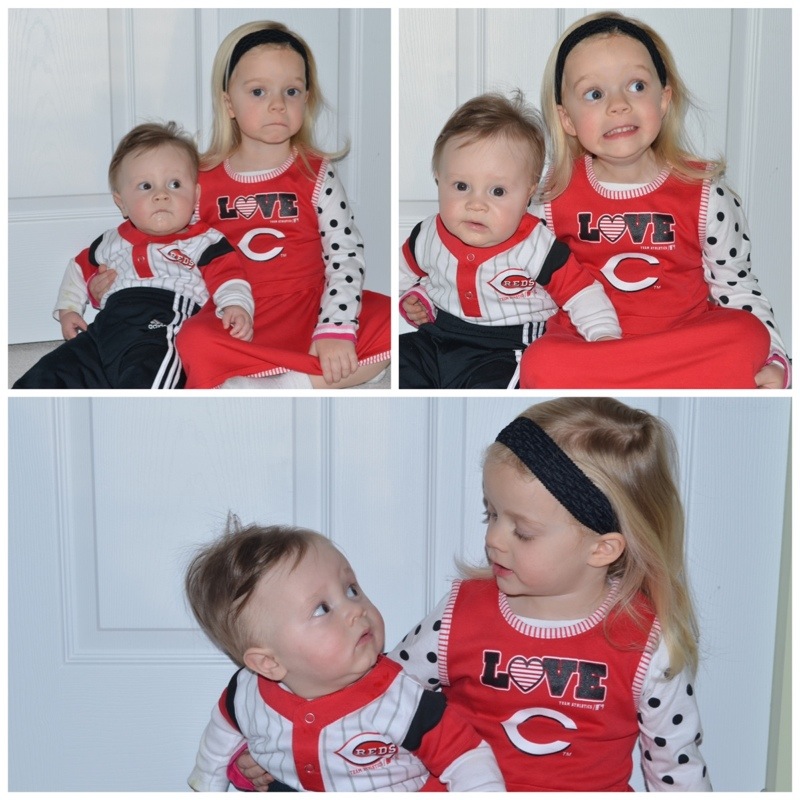 Fun with cousin Hannah. We are just a little into the Reds this month. It is April after all. 🙂 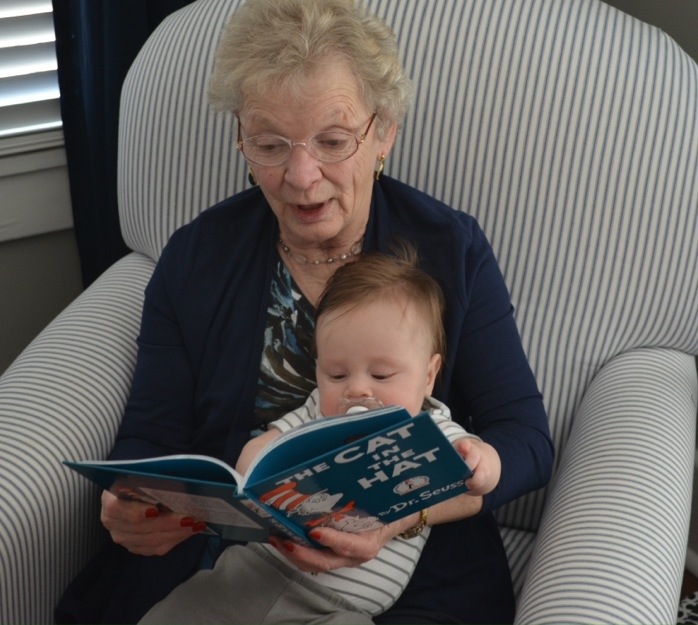 Mom Mom and Grammy spent the week with Drew in Nashville while I was at a work conference. Drew loved every second. 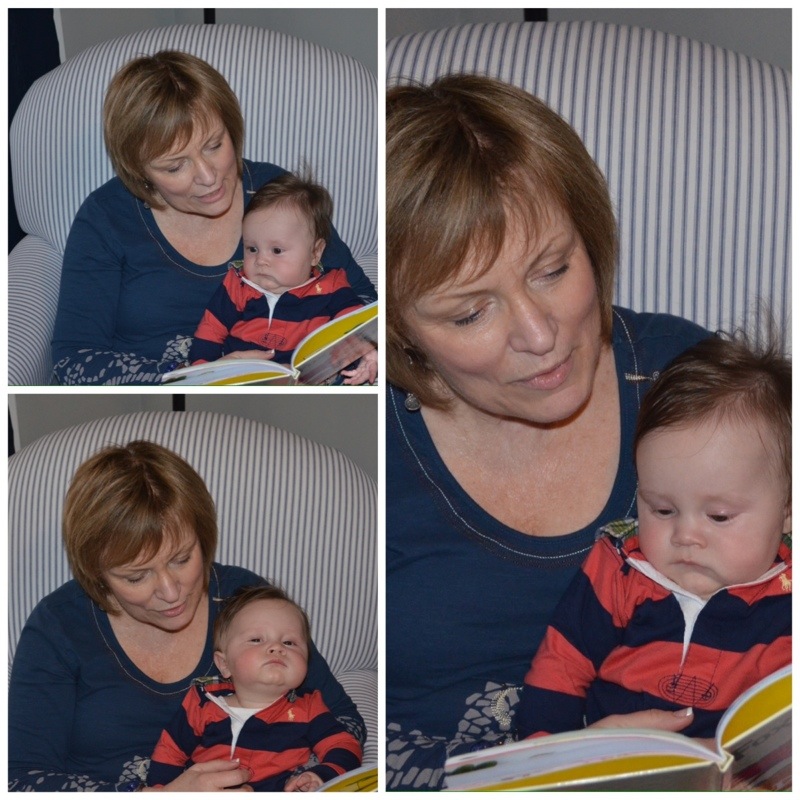 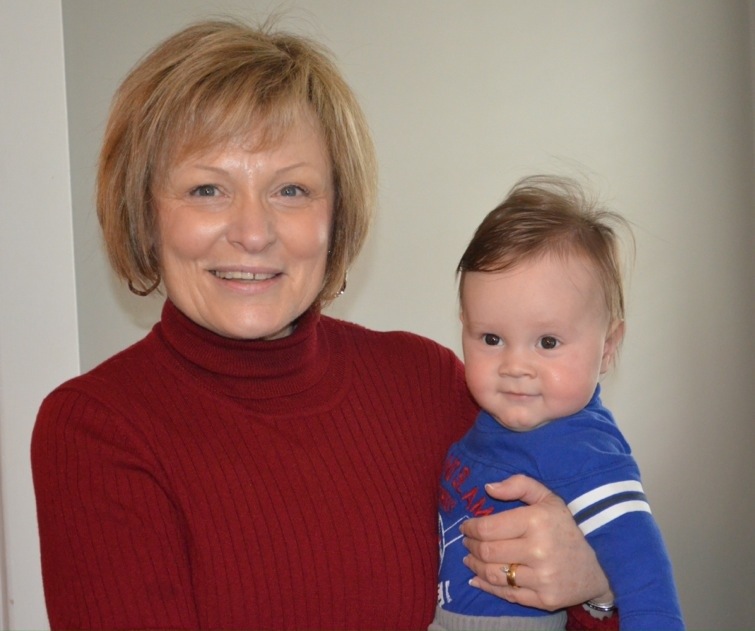 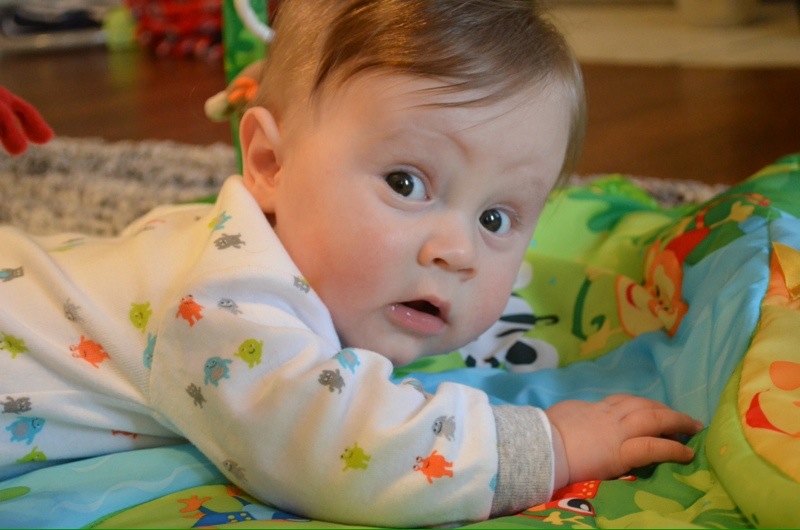 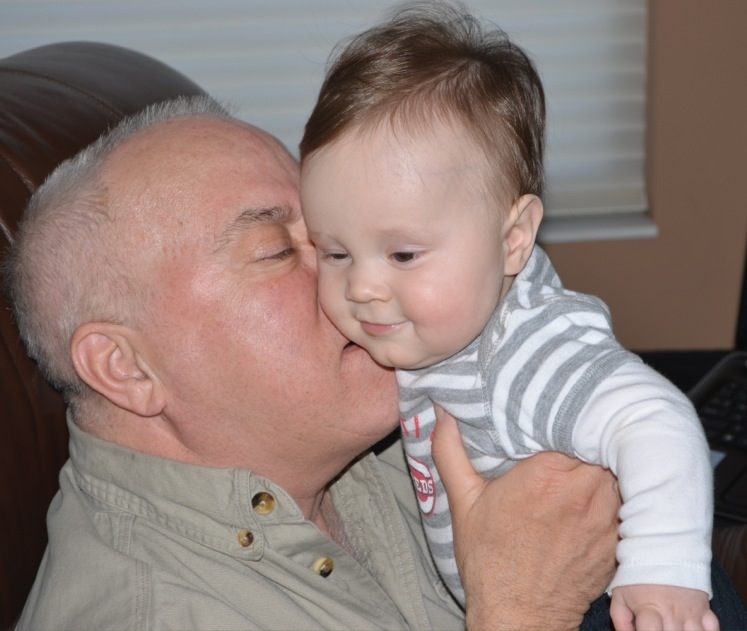 After Easter I took a few days off work and stayed in Cincinnati a few extra days. 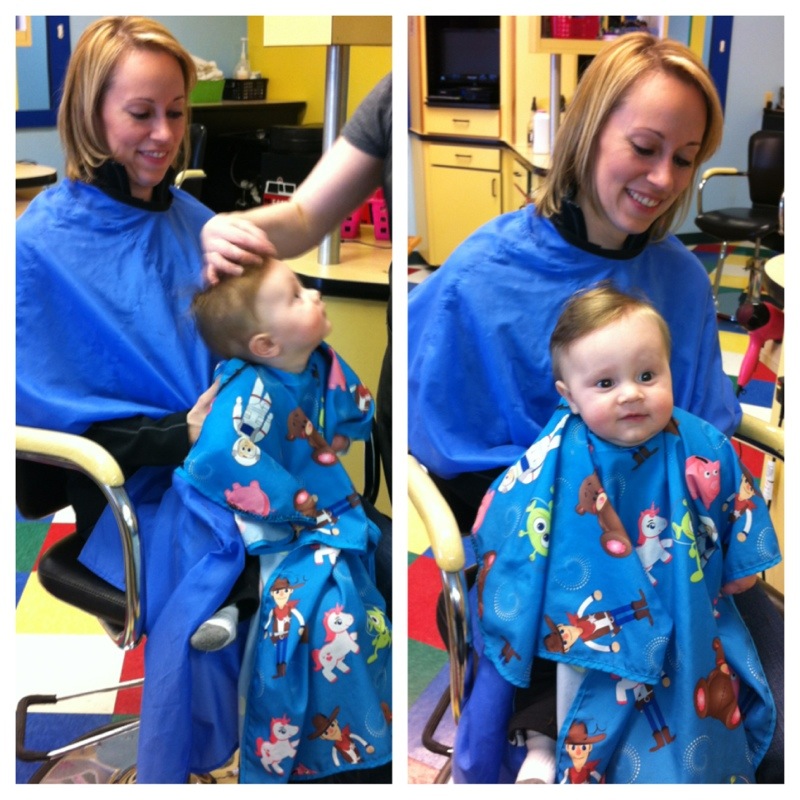 First haircut (April 3rd). Just a trim but certainly needed. How cute is he?? 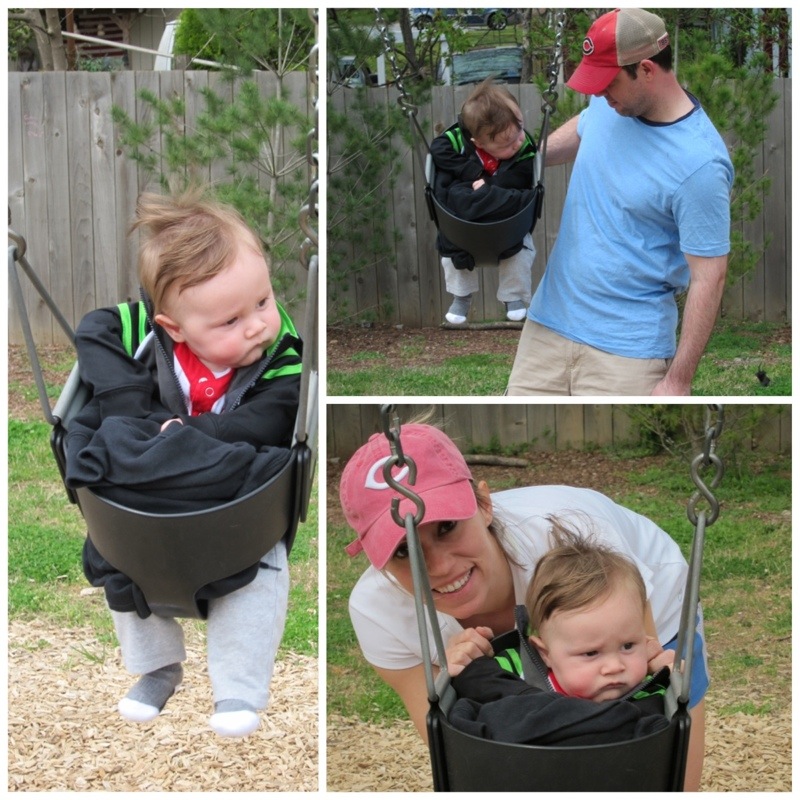 Drew was just a little unsure of his first time on a swing.
We have had a fun month and are loving that Spring has sprung! Until next month… 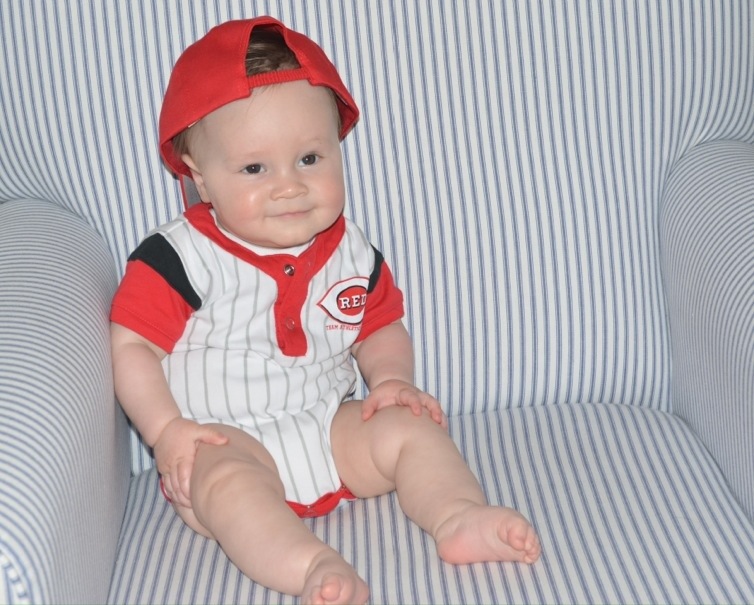