Wow. Today was a brutal. Besides actually going through un-medicated childbirth, I feel like today was my initiation into motherhood. Ok, maybe that’s a tad dramatic but here’s how the day went down. Early this morning around 3am, I hear Drew coughing and then crying. No big deal, this happens occasionally, so I scurry down the hall to give him his pacifier so that he doesn’t wake himself up all the way (sigh…..removal of the pacifier is going SUCK as we approach 2 years old). I go back to bed, look at the clock only to realize that I only have about two more hours of sleep. I usually get up early and work an hour or two before Drew gets up – but on this particular day I actually had to get showered and dressed (gasp!) and be ready for a full day of meetings outside of the house. This happens almost never (thank goodness) but of course today was the day I had to do so. So anyway, I start to doze off and hear Drew again. 4:08am. I head down the hall and when I get to his room, I see that he is upright….puking. Ugh, seriously?! Ok no big deal. This is a first for Drew but I can handle this. I remove Drew from the disaster, calm him down, clean him up, change sheets, evaluate the situation and put a perfectly happy Drew back to bed. Whew. That wasn’t too terrible. I was thinking he swallowed a bunch of phlegm (he has a little cold) and maybe choked a bit since he was super chipper after cleaning him up. At this point I was optimistic that he wasn’t actually sick.

Ok so Drew is back in bed and sails right to sleep. It is now 4:40am so I decide there is no use of going back to bed. I work some and then get ready for the day. Drew wakes up at 6:30am (normal) and is happy but refuses to eat. He finally agrees to applesauce and eats plenty of it. We proceed with the rest of the normal morning routine and since he is acting fine, I assume he is not sick and that the 4am puking was in fact a fluke. We get out the door right on time at 7:30am. I’m even dressed in what working women wear who don’t work from home every day – also known as dressy clothes + heels. *Sidenote – how on earth do other moms do that every single day??? Ok so we drive the 6 minutes to school and all is well until I hear a little whimper when I pull into the daycare parking lot. I park, look up in my rearview mirror where I can see Drew in his mirror, and proceed to watch him vomit all over himself. A LOT. Oh dear lord is this for real? Sigh……….this sucks. Poor kid. I head back home (and hear Drew saying “all done, all done all done”….which is pretty cute because that meant he was “all done” sitting in his puke. I hear ya buddy. I run inside for a few beach towels (he’s covered) and get the pukey kid out of the car and into the tub pronto. I clean him up, clean me up (now that I’m pretty much puke covered too) and put him into the crib to be contained while I go scrub down the disgusting car seat. Oh and remember I had a meeting at 9am? Ha!

The rest of the day was a breeze, compared to the morning. My manager was super understanding as she has two little ones herself. My morning meetings that I missed were handled by someone else from my company – which was awesome. Drew let me rock him to sleep and he proceeded to take a monster nap – two more big wins. And after waking up, Drew felt much better (well no more puking anyway!). I ended up running him into daycare for 2 hours in the afternoon so that I could attend a meeting I really didn’t want to miss. Maybe that’s a bad mommy move but actually, I like to think it was good compromise – and luckily there were no issues while he was there and he was playing away when I picked him up. We then had a nice little evening and Drew went to bed just fine. Oh and for the record, I did call the doctor this morning who proceeded to tell me to keep an eye on him and keep him hydrated. Check.

As I type this all out (and I really don’t know why I am!), I’m realizing today wasn’t so bad after all. Tricky? Yes. Kind of gross? Definitely. Bad? Not at all. Actually in a weird way I feel very accomplished right now….I mean, we survived just fine! Eh, ok well we survived anyway. I’m constantly worrying that I’m not doing a good enough job as Drew’s mom during the work week. It is so hard balancing being good at my job and being a good mom. Working is something I want to do though…something I like to do….but of course at the end of the day, my first job is being a mom. Today it felt good to remind myself of that (even if I did take him to daycare for 2 hours with a stomach bug). Remembering today also helps me put the other days in perspective that I think are challenging….when really they are actually pretty simple.

…and now I’m going to enjoy this glass of wine I’ve been thinking about since 8am. Here’s our sweet little guy right now. Praying he stays just like this til 7am. But if he doesn’t that’s ok too because I hear he won’t stay this little forever. 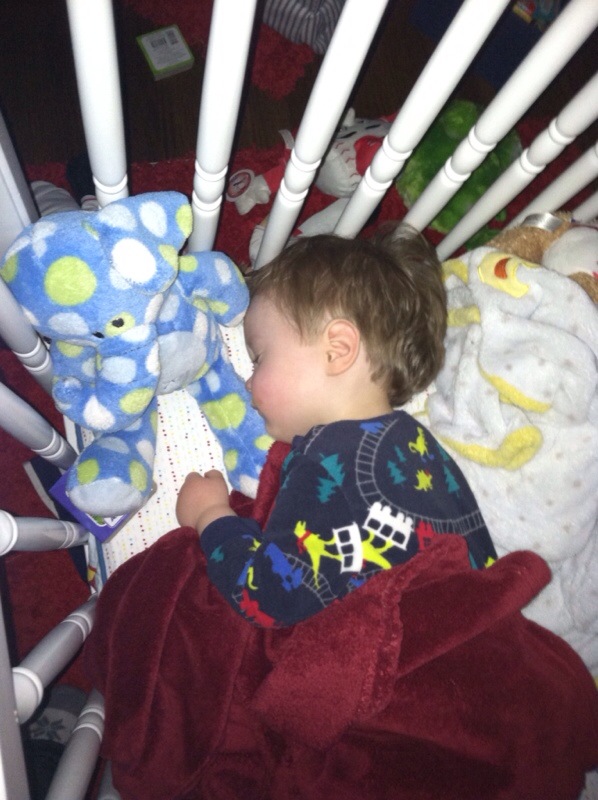